Warning: "continue" targeting switch is equivalent to "break". Did you mean to use "continue 2"? in /homepages/20/d26922842/htdocs/2010sat/wordpress/wp-content/plugins/siteorigin-panels/inc/styles-admin.php on line 392

Warning: "continue" targeting switch is equivalent to "break". Did you mean to use "continue 2"? in /homepages/20/d26922842/htdocs/2010sat/wordpress/wp-content/plugins/social-networks-auto-poster-facebook-twitter-g/inc/nxs_functions_engine.php on line 173

Warning: "continue" targeting switch is equivalent to "break". Did you mean to use "continue 2"? in /homepages/20/d26922842/htdocs/2010sat/wordpress/wp-content/plugins/social-networks-auto-poster-facebook-twitter-g/inc/nxs_functions_engine.php on line 180
 Ingleston – Stewartry Archaeological Trust
Skip to content 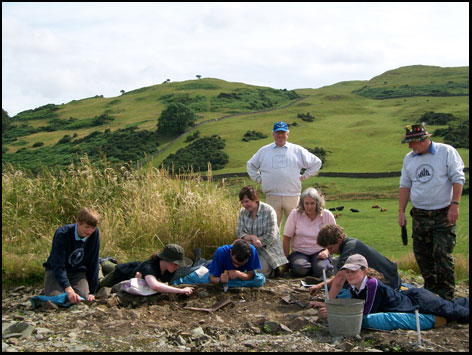 Recent Project Updates are being Posted in our news section.  Please check the news until this section is fully updated.

Excavation has continued to the south and western perimeters of the motte and has exhibited burnt timber construction and defence lines. This was highlighted by linear features comprising iron nails and rivet heads from burnt timbers along with charcoal, burnt clay and daub. Further sherds of local galena glaze pottery were also in evidence. A double furnace on the south-east perimeter of the summit was excavated and recorded and produced further fiddle-key head nails, glassy slag, furnace waste, and evidence of a tuillére.

The burnt remnants of a later timber tower were gradually uncovered in the shape of burnt timbers and large quantities of iron nails. An area of postulated flooring to the inside of the tower exhibited some cobbling and further excavation may reveal the mode of construction of this feature where there is some evidence pointing to the possibility that part of  the tower base may have been of sill beam construction. On previous excavation evidence it has been determined that there were two timbers towers on site and that both were destroyed by fire during the civil wars in Galloway between 1175 and 1234 AD.

South of the previous feature was an apparent area of smithying where a cobbled area exhibited a quantity of hammerscale. An iron arrowhead was found adjacent to this feature.

Further excavation of the outer defence line has uncovered evidence of a third stone base for a small timber tower and an item of particular interest found on the perimeter of the northern defences was an iron arrowhead. An iron spearhead, a broken loom weight and a spindle whorl were recovered from the western perimeter of the summit.

Although the progress of the excavation has been adversely affected by record rainfall during 2008, the excavation is ongoing and further developments are expected next season.

A tenth season of excavation on private land was undertaken by experienced volunteer diggers and advanced students of the Stewartry Archaeological Trust, but due to the introduction of Foot & Mouth Disease precautions the season had to be limited to only four weeks.
Excavation continued to expose the outer defence line of the twice destroyed by fire timber tower built by the Lords of Galloway (AD 1100 -1235). The defensive features were still apparent to the west side of the motte hill and a level comprising large flat stones used as paving between the tower and the timber defence line was apparent. This displayed evidence of intense heat having been applied to it. Almost 80% of the defensive encirclement has now been exposed and evidence of timber construction in the form of the identification of large numbers of fiddle key head nails has been observed and recorded.
Numerous sherds of local galena glazed pottery of the period 1150-1300 AD have been recovered interspersed with the occasional sherd of finer ware emanating from Gaul pointing to the fact that this was, at one stage in its career, a high status site.
Over the defensive level a series of furnacing features have been excavated, pointing to the possibility that some form of smelting went on either between the two phases of the timber towers ( c. 1174-85 and c 1120 – 1235) or immediately after the final destruction by fire of the second tower.
A large furnace situated at a low level on the northern extremity of the motte hill was completely excavated out and produced dating evidence for its operational life to have been post 1235 AD after the destruction by fire of the second timber tower. It must be presumed that it was used to salvage ironwork, etc, scavenged from the burned ruins of the motte hill defences.
The archive is held by Dumfries & Galloway Council and lodged in the Stewartry Museum in Kirkcudbright.
Excavation will continue in 2008
e-mail: robert@sat.org.uk

2005 Abreviated Report
An eighth season of excavation by experienced diggers and selected students exposed the remnants of a further section of the timber hilltop defences constructed by probable Dreng settlers in the early part of the 13th century. An earlier, 12th century, timber tower construction would appear to have been burnt down during the local rebellion of c.1185 AD and evidence of its presence underneath the later ruins would confirm this.

The remnant of the stone base of a timber tower was excavated and the natural level was found underneath, an area which had been subjected to intense heat. The remnant of a paved area between the tower and the defensive perimeter was uncovered. Dating evidence was found in the form of numerous sherds of local and imported pottery of the 12/13th centuries, a number of clench nails (one in perfect condition) were uncovered from the layers of charcoal overlying part of the rubble from the tower, and part of a 13th century bronze buckle was found over the proposed paved area and two sherds of fancy pottery ware, one with incised decoration, point to imported goods of the same time. A number of stonelined postholes were exposed pointing to either a reuse or a juxtaposition of some of the supporting timbers of the towers.

A smithying furnace on the northern perimeter of the motte hill, found during excavation last season (2004) continued to be examined and yielded up pieces of slag, and various metallic objects. The whole was sitting on top of sherds of local galena glazed pottery thus signifying a terminus ante quem dating for its use. A reasonable hypothesis is that it was employed in supplying iron material for the construction of the later of the two timber towers.Continuing excavation following the line of the defences to the south of the founds of the stone based timber towers has revealed the possible presence of a third stone based defensive feature.

REASONS FOR THE EXCAVATION:

In the spring of 1988 the author of this Interim Report was asked by Robin Noble, the then Director of the Council for Scottish Archaeology incorporating the Council for British Archaeology Scotland, to examine and report on the condition of the monument, Ingleston Motte, in the parish of Kelton, Stewartry of Kirkcudbright, now Dumfries and Galloway Region, at NX 774579.

This construction is defined by Coles as a Simple Motte, Type No. 1. It stands 200 meters east of Ingleston Farm, and a hundred metes from the road leading from Gelston village to Auchencairn. It is by no means the only monument in this locality as there is Dunguile Hillfort and two other “motes” within a few hundred metes to the west. There was evidence of some soil erosion caused by grazing animals, rabbit-burrowing and the prevailing south-westerly weather conditions of the last 800 years. A comparison of size was made between Coles measurements of the site in 1891, the RCAHMS Report of 1914 and both Christopher Tabraham’s 1980 measurements and the author’s current one (1988). 1881 Length 75 feet (23.07 metes) Breadth 52 feet (16.00 metes) 1911 Length 71 feet (21.84 metes) Breadth 43 feet (13.23 metes) 1980 Length 21.00 metes Breadth 13.00 metes 1988 Length 20.30 metes Breadth 13.48 metes.

The present total circumference is 44.923 metes The 1988, 1980 and 1911 measurements compare favourably, but it is noticeable that the breadth has decreased some way since the 1881 Report. There is considerable damage to the summit caused in the main by animal erosion – for example cows calving there (during the 1988 exploratory excavation no fewer than 11 calves were born within three metes of the excavation trench). It was therefore considered to be efficacious to excavate at least part of the summit of this medieval monument before any further erosion occurred.

The 1914 Fifth Report and Inventory mentions a “low oval mound” on the summit, but this had completely disappeared during the intervening seventy odd years. This was considered adequate reason for excavation.

A trial trench was dug and yielded artefactual evidence of the burning of timbers in a quantity of charcoal and a number of iron nails. The adverse weather conditions of the 1988 season did not allow much excavation, but a report was submitted to the Regional Archaeologist, Jane Page, and a request was put in through a grant-funding body for a fence to be erected round the monument to prevent the ingress of farm animals. This, was duly done and, in part, stabilised the summit of the motte. Excavation continued for a few days during 1989 when more evidence of burning was found and a number of sherds of yellow-green glaze native pottery of the 12 – 14th centuries were recovered along with some pieces of amethyst. The presence of the amethyst posed a bit of mystery.

In 1996, Jane Brann (nee Page), now Council Archaeologist, suggested that it would be a good time to re-examine the summit of Ingleston Motte to try to establish the presence of a timber tower and fortifications, an Anglo-Norman castlestead of the 12th/13th centuries – the era of the Lords of Galloway.

In 1997 Lizzie Cochrane and the author, assisted by some of the student diggers from the Botel Bailey Excavation reopened the Ingleston Motte Excavation.

In spite of attempts by the Royal Air Force to totally annihilate the site when one of their aircraft crashed only two fields away from the excavation site, a four-metre square trench was opened on the north-east quadrant of the summit where no previous excavation had taken place and plough soil was removed to a depth of 0.5 metes . Artifacts in the form of more yellow-green glazed pottery sherds, iron nails and some charcoal were recovered. A quantity of amethyst was again found, the use of which was still not clear at that time. Extensive evidence of burning was present and it may be deduced that a timber tower surmounting the motte was burnt down in antiquity. ( D & E Scotland. 1997. p. 24).

The current Site Supervisor, Robert McCubbin is a local man and the site has progressed well for the last few years. Robert has diligently taken some of our students every week during the season and given them a different aspect of archaeology, rather than pre-historic at Newbarns.

He is a dedicated and valued member of SAT and can be contacted on robert@sat.org.uk If you require further information.

A longer update on the site will be forthcoming at a later date.